Thousands Around the Globe Will Celebrate John Lennon's 70th Birthday

Thousands Around the Globe Will Celebrate John Lennon's 70th Birthday

I think this Video is Way cool and Want to thank Google for honoring John Lennon as he is a huge inspiration to so many around the world.
Red Velvet Media have done a few shows in Honor of John and have spoken to some of the people that were integrated as with Bob Gruen Photographer and many people that were at the Record plant that night he went to the next place.

I want to Thank all of you that have supported Red Velvet Media Blogtalk Radio for these shows as some were of very sensitive subjects and I felt it was very important to get this all out to you the public that wanted to know some TRUTH! 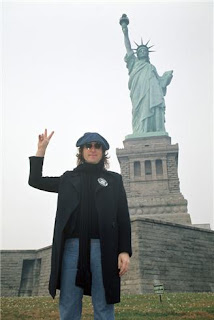 It's hard to believe, but former Beatle John Lennon would have been 70-years-old this weekend if he had not died a tragic death on a sad December morning nearly 30 years ago. To celebrate the life that touched so many people, birthday celebrations will take place around the globe. A weekend of activities are Happening!Yoko Ono will be in Iceland Saturday to perform and light the Imagine Peace Tower, a stone monument remembrance of Lennon in 2007.

New York City, where The Beatles star was gunned down by a deranged fan, will have tributes in Central Park and will hold a concert in the evening of October 9th with proceeds going to Amnesty International.

In LA the happenings are as follows

11:30 AM - 100-foot long "John Lennon 70th Birthday Message Scroll" will be started for the public to inscribe personal messages. (The scroll will be sent to Yoko Ono).

12:00 Noon - The Beatles "They Say It's Your Birthday" echoes over the sound system and the program begins!

12:20 PM - Singer Jordan Zeigler performs "Beautiful Boy" (Dedicated to John and Yoko's son Sean, who was born the same day as his dad and is turning 35.)

12:25 PM - Chris Carter, radio host of "Breakfast With the Beatles" lights birthday cake candles as everyone sings "Happy Birthday" to John and Sean.

1:45 PM - Closing Circle at John's star as "Imagine" , "Give Peace a Chance" and "Love is All You Need" echo through the crowd.

In his native England here is what will be happening

A global peace monument, entitled 'Peace and Harmony', created by US artist Lauren Voiers, will be gifted to the people of Europe to mark what would have been John Lennon's 70th birthday. The 18 foot monument will be unveiled by Lennon's eldest son Julian, who asked the artist to incorporate a white feather into the design, saying: "One of the things my father said to me was that should he pass away, if there was some way of letting me know he was going to be ok, it was by, in some shape or form, presenting me with a white feather."

The National Trust offers a joint tour of the childhood homes of John Lennon (Mendips) and Paul McCartney (20 Forthlin Road). This is a unique, once in a lifetime, opportunity to see John and Paul's humble beginnings and where The Beatles met and composed many of their early songs.

All aboard the Magical Mystery Bus for a tour which takes in the places that inspired some of the Beatles most famous songs like Penny Lane and Strawberry Field. The tour finishes at the legendary Cavern Club where you can present your ticket for an exclusive souvenir from your trip.

The Cavern Club opened as a jazz club in 1957 and is where the Beatles were discovered by Brian Epstein, on November 9, 1961. The Beatles went on to perform here another 291 times in the early 1960s, propelling the Cavern Club into the worldwide spotlight and making it one of the most famous clubs in the UK. Special Lennon tribute shows will take place until December 8th, 2010.

This 'Fab Four Star Hotel' in the heart of Liverpool is the perfect place for any Beatles enthusiast to rest their head after a day of sightseeing. Housed in a stunning landmark building, all rooms feature a tasteful selection of original Beatles artwork. Die-hard Lennon fans may opt to splash out on the aptly named, 'Lennon Suite' which features a white baby grand piano – perfect for making your own music.

This gallery, housed within the University of Liverpool, is hosting an exhibition during the John Lennon Festival (October 9 – December 9) called, "Astrid Kirchherr: A Retrospective." Astrid was the first person to shoot studio shots of The Beatles and her photographs capture their innocence and ambition during their formative steps to stardom, when Pete Best was the drummer and Stuart Sutcliffe was the bass player.

Located in Liverpool's famed Albert Dock area, this interactive museum follows the Fab Four from their early beginnings to global Beatlemania. The Beatle Story recently tripled in size and will be hosting a range of special events throughout the John Lennon Tribute Season.

One of the most photographed spots in all of London has to be the cross-walk or 'zebra crossing' (as the Brits call it) on Abbey Road. While the exact crossing is a busy intersection today, fans from all over the world still flock to the site just a few blocks away from St John's Wood Tube station. Check out the live webcam of the crossing and find out more about Abbey Road Studios by clicking here.

Another great way to see The Beatles' London is by taking a walking tour. Two of the best are from London Walks. If mobility is an issue, or you're keen to cover a bit more ground, Access All Areas rock tours, offer a range of great Beatles options in both London and Liverpool.

Located at 231 Baker Street, this is a popular spot for picking up a range of unique souvenirs. A few blocks down the road at 94 Baker Street, fans can see the Blue English Heritage plaque for John Lennon which sits above the spot where the Beatle's retail shop, Apple Boutique, used to stand.

*This is a side of John we seldom were able to see .. He loved Life and I want to Thank the Morrison Gallery in New York for all the great John Lennon Images..
Julian Lennon has a Art show at the Morrison .. Stay tuned I will be posting some of those Images soon:)) 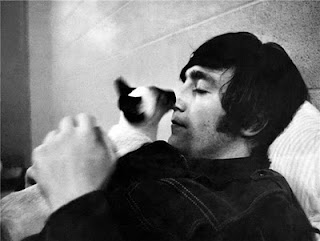