Join me as I talk to my old friend and celebrate his new adventure!
Stephen was chosen to do this event and now will be on the Food network Live from his Cafe in Hermosa Beach Ca this Sunday the 15th at 10pm !
I am so excited for him and his team .. Join me as I talk to Stephen ,Jazmina & Joey!
We will talk about the goings on the road as well as hear some kickin Zydeco Music from
"Lisa Haley & the Zydekats"

"Oh how I love good old Southern cooking and Red Velvet of course and Zydeco Music:)" 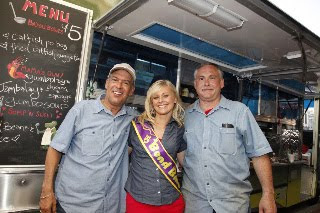 ***I want to Thank the Food network for providing me with all the info Images and there support of this broadcast and giving my friend the chance to smile, live and fly like the wind! 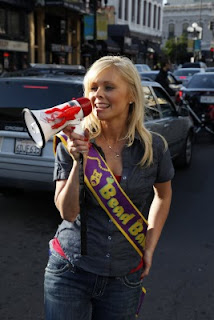 NEW YORK – JULY 12, 2010 –Amazing chefs across the country are leaving traditional restaurants behind and
hitting the streets in mobile kitchens serving some of the most unique and delicious dishes ever tasted. Food
Network’s new primetime series, The Great Food Truck Race, features seven such gourmet food trucks as they
embark on an epic coast-to-coast culinary road trip to convince Americans to step outside their culinary comfort
zones and try something new – from a truck. Tyler Florence hosts this six-episode competition premiering Sunday,
August 15th at 10pm ET/PT; the series resumes in its regular timeslot of Sundays at 9pm ET/PT on August 22nd.
From out-of-the-box sandwiches, burgers, and crepes to unique takes on Vietnamese, French, and Cajun cuisines,
the trucks compete in weekly challenges to see who can sell the most food and race to the next episode while the
losing team drives home. The last truck standing wins a $50,000 grand prize.

“Not only does the series focus on a hot new culinary trend, but the drama of the competition pushes these
teams’ cooking skills, business savvy and relationships to their limit,” said General Manager/Senior Vice President
Programming, Bob Tuschman.

In the premiere, the teams meet Tyler in Los Angeles, the center of the food truck revolution, and the race begins
with the teams’ first game-changing twist known in each episode as the Truck Stop challenge: Instead of starting
in Los Angeles, the race commences in San Diego. To even the playing field, the teams begin with empty trucks
and an equal amount of seed money. They have three days to prepare, promote and sell their food by any means
necessary. After a weekend of triumphs, teamwork, and tests of character, the totals are tallied and the trucks find
out who continues the great race and who goes home. New twists and turns arise as the race continues through
Santa Fe, N.M.; Ft. Worth, Texas; New Orleans; Jonesborough, Tenn., and concludes as the final two trucks race
to the finish line through the hungry streets of New York City’s five boroughs. Guest chefs throughout the season

Click here to Vote for Ragin Cajun Cafe on the Food Network
at August 17, 2010 No comments: 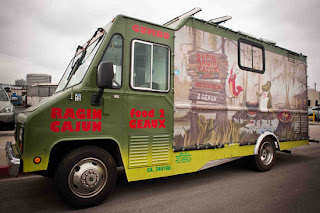 Red Velvet Media talks to Dennis Ferrante! Have a heart for Dennis! 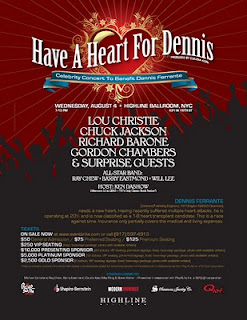 TUNE IN on FRIDAY!!!: RED VELVET MEDIA interviews legendary recording engineer DENNIS FERRANTE on FRIDAY 8/6 @ 5pm/est -2pm/pst. Join Holly Stephey as we interview DENNIS about his distinguished career engineering albums for some of rocks greatest artists including John Lennon, Alice Cooper, Kiss, The Clash, Lou Reed, Iggy Pop, The Who and many many more. Very Special Guest, MAY PANG will be calling in to join us and talk about the benefit concert which was held in NYC this week and her role in organizing the event. PLEASE JOIN US!!!CILCK HERE TO GO LIVE !